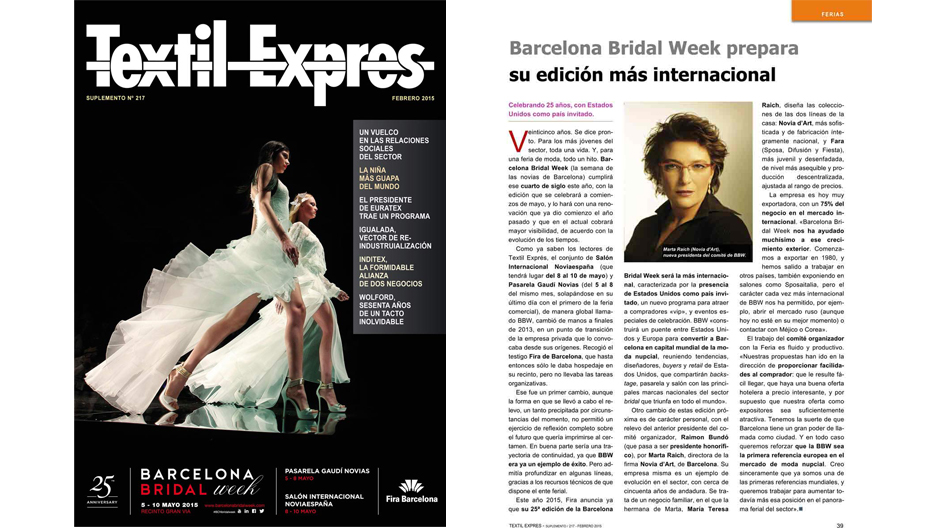 Twenty-five years. Easy to say. For younger industry it is such as a lifetime. And, for a fashion show, it is like a milestone. Barcelona Bridal Week fulfill that quarter of a century this year; this edition will be held in early May, and will do it with a renovation that already began last year with more visibility, according to the changing times.As the readers of Textil ExprÃ©s know the set of International NoviaespaÃ±a (to be held from 8 to 10 May) and Pasarela GaudÃ­ Novias (from 5 to 8 of the same month, overlapping on his last day with the first of the commercial fair), overall call BBW, changed hands in late 2013, from private company that managed it from the beginning to Fira Barcelona. Fira Barcelona started to bring it on and managing everything.This was the first change, but the way it was conducted over, somewhat precipitated by circumstances at the time, it did not allow a full year of reflection on the future he wanted to transmit to the fair. It would be a path of continuity, since BBW was already a success story, but it admitted delve into some lines, thanks to the technical resources available to the Exhibition entity.This year 2015, Fira announced that as it is the 25th edition of the Barcelona Bridal Week will be the most international one, characterized by the presence of the United States as guest country, a new program to attract  VIP buyers and special events to celebrate. BBW "build a bridge between the United States and Europe to make Barcelona the world capital of bridal fashion, gathering trends, designers, buyers and retail from USA that will share backstage, catwalk and lounge with major national brand of bridal sector that triumphs worldwide. "Another change in this next issue is personal; with the relief of the former president of the organizing committee, Raimon BundÃ³ (which becomes honorary president), by Marta Raich, head of the firm Novia d'Art, Barcelona. Her company itself is an example of evolution in the industry, with nearly fifty years of existence. It is a family business, where the sister of Marta, Maria Teresa Raich, designs the collections of the two lines of the house: Novia d'Art, sophisticated and entirely domestic manufacture, and Fara Sposa, (Broadcasting and Party), more youthful and casual, more affordable level and decentralized production to adjust the price range.The company is very exported nowadays, with the 75% of business in the international market. "Barcelona Bridal Week has helped us a lot to this external growth. We started exporting in 1980, and we have gone to work in other countries, also exhibiting in shows such as Sposaitalia, but the increasingly international nature of BBW has allowed us, for example, to open the Russian market (although today it is not in its best time) or make with contact Mexico or Korea. "The work of the organizing committee with the Fair is fluid and productive. "Our proposals have gone in the direction of providing facilities to the buyer: find it easy to get to the fair, to have a good hotel offers with a reasonable price, and of course that our offer as a exhibitors is sufficiently attractive. We are lucky that Barcelona has great power as a city call. And in any case we want to settle the BBW as the first European market benchmark in bridal fashion. I sincerely believe that we are already one of the world's leading references, and we want to work to increase this position further in this field trade shows Â».